The letters "S.S." mean "scilicet," a Latin word that means "to wit" or "in particular." You may see this abbreviation near the blanks related to the location of the notarization, such as "State of ___, S.S. County of ____." This literally means, for example, “State of California, in particular, the County of Los Angeles."

Example of a notarial certificate that includes the “S.S.” abbreviation: 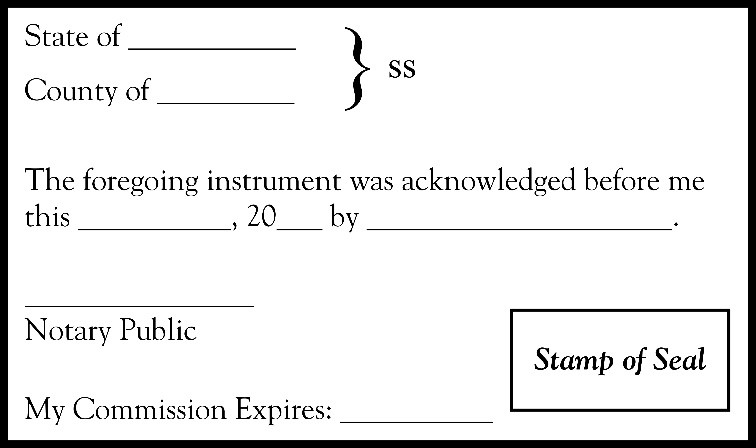 The letters “L.S.” stand for the Latin phrase “locus sigilli," which literally means "the location of the seal." This is meant to identify where the notary's seal should be affixed. If your state requires a rubber stamp seal, you should not affix the notary seal over these letters, as this would obscure the text of the seal.

These letters may also appear at the end of a signature line for the signer. This is a carry-over from a time when individuals had personal seals to authenticate their signatures. However, in modern times, a signer's signature is his or her seal, and nothing special needs to be done.

Occasionally, an individual signing a document on behalf of a corporation may affix the corporate seal over the words "L.S." at the end of the signature line.

In general, these abbreviations are decorative only and can be ignored. Of course, always be sure to consult your own state's laws.

Legal Disclaimer: The American Association of Notaries seeks to provide timely articles for notaries to assist them with information for managing their notary businesses, enhancing their notary education, and securing their notary stamp and notary supplies. Every effort is made to provide accurate and complete information in the American Association of Notaries newsletters. However, we make no warrant, expressed or implied, and we do not represent, undertake, or guarantee that the information in the newsletter is correct, accurate, complete, or non-misleading. Information in this article is not intended as legal advice. We are not attorneys. We do not pretend to be attorneys. Though we will sometimes provide information regarding notaries' best practices, federal laws and statutes, and the laws and statutes of each state, we have gathered this information from a variety of sources and do not warrant its accuracy. In no event shall the American Association of Notaries, its employees, or contractors be liable to you for any claims, penalties, loss, damage, or expenses, howsoever arising, including, and without limitation, direct or indirect loss or consequential loss out of or in connection with the use of the information contained in the American Association of Notaries newsletters. It is your responsibility to know the appropriate notary laws governing your state. Notaries are advised to seek the advice of their states' notary authorities or attorneys in their state if they have legal questions. If a section of this disclaimer is determined by any court or other competent authority to be unlawful and/or unenforceable, the other sections of this disclaimer continue in effect.

Notary bonds and errors and omissions insurance policies provided by this insurance agency, American Association of Notaries, Inc., are underwritten by Western Surety Company, Universal Surety of America, or Surety Bonding Company of America, which are subsidiaries of CNA Surety.

Please Select a State
Please select your state from the dropdown menu below and then click on the "Update State" button to order notary products.